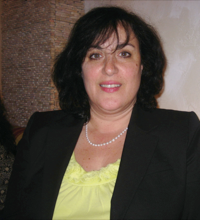 Theresa Giacobbe-Grieco received her Masters degree in psychology from Long Island University. She has additionally completed her Certificate of Advanced Studies in Applied Behavior Analysis from LIU. She has worked in Transition Services as a Clinical Supervisor, Operations Director and Community Integration Specialist at Positive Behavior Support Consulting and Psychological Resources, P.C. since 2004. Theresa became interested in Self-Directed services while researching options for her brother who is now living in his community.

She spent 20 years of her career at the Developmental Disabilities Institute where she was the Associate Director of Residential/Community Services. She found great joy in being part of the deinstitutionalization movement and assisting people in leaving institutions and moving into homes in their communities. She now finds even greater joy in assisting people to take advantage of self-directed services where the individual, rather than an agency, can chose where to live, work and build their future. She has worked with numerous families in Self-Directed Services since Self-Direction began on Long Island.  She is currently a member of several peoples Circles of Support.

She is a past president of The New York State Association for Behavior Analysis (NYSABA). She is a co-author of several publications, and has presented at many local and national conferences.

Theresa is actively involved in her community and a board member and leader of various organizations. She was a Girl Scout Leader for 15 years and connects Gold Award applicants with projects that could further integration and social opportunities for all. She has been a board member of the Hauppauge Athletic Association Swim Club, a Catechist, a member of the Friends of the Smithtown Library and League of Women Voters. Theresa was also awarded the NYS PTA Lifetime Achievement Award.

Her clinical and research interests are in the areas of transition services, self-determination, setting events, friendship formation, high school and college social supports and advocacy. She resides in Smithtown with her husband Steve and has two grown daughters.